Excerpt from The Beautiful Pretender

Since I enjoyed this book so much, I thought I would include an excerpt from The Beautiful Pretender by Melanie Dickerson for today's post.  Happy reading! 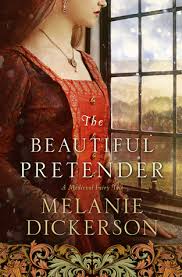 “Last but not least,” Magdalen said with a slight twist of her lips. “See that girl sitting at the margrave’s right side? That’s Fronicka. Her father is the Duke of Geitbart.” Magdalen leaned over to whisper in Avelina’s ear, “She is determined to marry the margrave and she’s given every other girl here notice that if they try to flirt with him, they will find something horrible in their bed the next night.”

Avelina leaned forward to get a better look at Fronicka. She was smiling at the margrave, looking quite demure and sweet. “Perhaps she was in jest.”

The other ladies sitting around the table were also smiling at Lord Thornbeck. All Avelina had to do was stay out of the way and let the other ladies flirt with him.

However, if Fronicka managed to marry Lord Thornbeck, it would mean certain destruction for the Earl of Plimmwald. The margrave would likely help his wife’s father, Geitbart, take over Plimmwald rather than stopping him and defending Plimmwald. The earl would be killed or imprisoned. All the people of Plimmwald, including her father and siblings, would be at Geitbart’s mercy.

She whispered under her breath, “God, be merciful and do not let the margrave choose her.”

As Avelina and Magdalen ate, Magdalen spoke of her younger sisters and brother with warmth and affection. “I wish they could have come with me, but the invitation was only for myself.” She talked about her mother and siblings a bit more, then spoke of how poor the villagers of Mallin were. “The copper mines have been Mallin’s main source of wealth. But about ten years ago the copper suddenly ran out. My father died soon after.” She sighed. “Our land does not grow much food, as the soil is very rocky. It would be good for raising sheep and other livestock, but the people don’t have money for buying livestock. It is why my mother wants to marry me to a wealthy nobleman, hoping he will help our people.”

Avelina nodded. “Plimmwald is not very wealthy either. Most of our people are farmers or woodcutters . . . peasants.” That was what Lady Dorothea called all the people of Plimmwald.

“My father always emphasized to me that as the noble family of Mallin, we were ultimately responsible for our people. I feel guilty sometimes living in a house made of stone, with silk dresses and plenty of food, when so many in our villages are going hungry.”

Avelina knew that guilty feeling too, but it was because she often slept and ate at Plimmwald Castle, while her little sister and brother had to fend for themselves in their little dirt-floor, wattle-and-daub hovel they shared with their father, who was dependent on the neighbors to help him get from his chair to his bed.

“But what can we do to help them?” Avelina wondered aloud.

“There is only one thing a woman might do, and that is to marry someone wealthy—and generous.”

Avelina started tapping her chin, then stopped herself as she realized it did not look very regal or ladylike. “Will any other ladies be joining us?”

“My maidservant said the margrave would want to ask me some questions. Did he already talk with you?”

“What did he ask you? Will I be too frightened to even be able to speak?” She asked the latter question more to herself than to Magdalen.

“It was not frightening, although I do think the margrave himself is a little gruff and frightening. His questions were not what I might have expected, but they were respectful and nothing was difficult to answer. Do not worry. You will answer him well.”

“It hardly matters. I do not wish to marry the margrave in any case,” she confided.

“Is there someone else you wish to marry?”

“No, not at all.” She should not have said that. How would she explain? “As you said, he is a little frightening, that severe look on his face, as if he is always angry. I should like to marry someone with more of a gentle, romantic expression, a man of poetry and learning.” That was true, at least, however unlikely it was.

“How do you know Lord Thornbeck is not a man of poetry and learning?”

“He used to be a knight.” Avelina shrugged, trying to think what Dorothea might say. “Most knights I know are rough and like to fight.”

Magdalen smiled. “I might feel the same, except I know my mother is hoping the margrave will choose me. It would solve so many problems for my people and ensure them the protection they need.”

Avelina decided immediately: If the margrave seemed to be a good person, she would try to turn his attention toward Magdalen and convince him to choose her. Magdalen was a deserving person, and it would make her happy to be able to help her people. And anyone he married who was not Fronicka would benefit Avelina. Yes, the margrave should marry Magdalen.

As soon as the midday meal was over, the beautiful blonde wife of the margrave’s chancellor approached Avelina.

“Lord Thornbeck is ready to speak with you now, Lady Dorothea.”

Avelina nodded. Somehow, after deciding to champion Magdalen, she felt much less afraid of the margrave. She had a plan.

Reinhart hated formality and pretense. People should say what they wanted instead of hiding behind hypocrisy. He had allowed Jorgen and his wife to teach him a few of the niceties that others of the aristocracy would expect of him. But the woman he married must realize that he could not abide insincerity, and he would always be forthright himself.

He might as well get these questions over with. At least she was the last one. “Lady Dorothea, in your opinion, what is a lady’s most important task?”

The lady, quite pretty, with brown hair and blue eyes, looked as though she might faint as the blood drained from her face.

“Lady Dorothea? Are you well?”

She did not have to say anything brilliant. He came up with the questions as a way to discover a bit about them, to get an idea about their temperaments and character, since he was not so interested in his wife having strong opinions. A simple maiden who was not too opinionated would suit him.

But he was not so sure this one could even speak.

Avelina’s breath traitorously left her. She tried to think what she might be expected to say. She did not want to impress the margrave, but she didn’t want him to suspect that she knew nothing at all about being a lady either. She should say whatever Lady Dorothea would have said. But Lady Dorothea probably would have said something about looking beautiful so as to bring her husband the most praise, and Avelina could not bring herself to say that.

“Lady Dorothea?” The margrave was looking at her as if he was afraid she had gone deaf. The chancellor’s fair wife who had led her into the room was also staring at her, along with her young, handsome husband, who sat with his quill pen poised to write.

With so many thoughts swirling in her head, she was too confused to think of anything other than the truth. “In my opinion, a lady should take care of her people, first and foremost. They are dependent upon her and upon their lord for their well-being, and therefore a lady should consider them in everything she does and every decision she makes.” Something the real Lady Dorothea had utterly failed to do.

She studied Lord Thornbeck’s expression, but he was unreadable. Frau Hartman, however, widened her eyes and glanced at her husband, who was too busy writing to return her gaze. Was her answer surprising? She must be more careful.

The margrave folded his arms across his chest as he sat behind his desk. His cane leaned against it in easy reach. “And how does a lady take care of her people? Can you give an example?”

She closed her eyes for a moment, balancing on the edge of the deep hole that she had just dug for herself. She might as well tell the truth. She had never been good at lies.

“A lady takes care of her people by making sure they have what they need—food, clothing, and shelter—to the best of her ability. She should discover what her people need and keep the lord of the land informed of these needs. One such lady is Lady Magdalen, whom I was speaking with during the midday meal. Her people are having difficulty since their mines were exhausted of their copper supply, and she is very concerned for them. She is willing to do whatever is necessary to help them. That is a perfect example.”

Thank You, God, for helping me think of that! She only hoped she had not put him off by making it obvious that Magdalen’s region needed the margrave’s wealth to help it survive. Frau Hartman had raised her brows. Avelina went on.

“Furthermore, a margrave’s wife should have lots of ideas—and should share those ideas with her husband and other prominent men of the region. She should tell the margrave how to solve the problems of the region and not just share what those problems are. Do you not agree, Lord Thornbeck?”

He fixed her with such an intense scowl that she could hardly breathe. How could he look severe and frightening and yet overwhelmingly handsome at the same time? His brown eyes, masculine forehead and jawline, broad shoulders, and well-formed mouth all combined to make him the most handsome man she had ever seen. She quickly looked away from him, her cheeks burning, embarrassed that she found the man so attractive. She hoped he could not read her thoughts.

“You are saying a lady should tell her husband what the region’s problems are and how to solve them?”

At least she didn’t have to worry that she was impressing him too much.


Posted by englishmysteriesblog at 3:58 PM