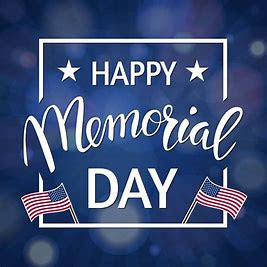 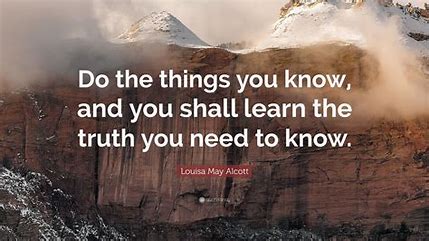 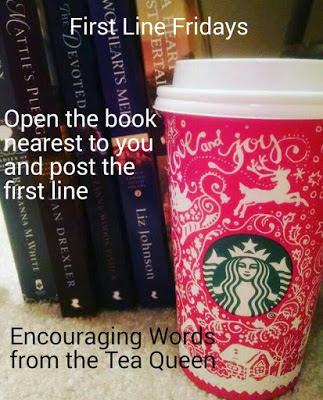 Grab the book nearest to you and leave a comment with the first line!
Today I am going to post a line from:
The Queen's Ball
by Anthea Lawson, Rebecca Connolly, and Jennifer Moore 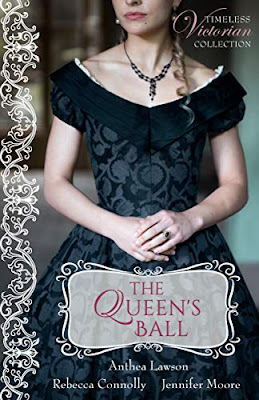 And the first line is...
Waltzed
by Anthea Lawson
London
May 1851
"The soft gray drizzle of an English spring coated the half-open buds of the rhododendron flowers in the garden and glazed the windows of the late Viscount Tremont's townhouse."
Happy reading and happy Friday!
Let me know your first line in the comments & then head over to
Hoarding Books to see who else is participating! 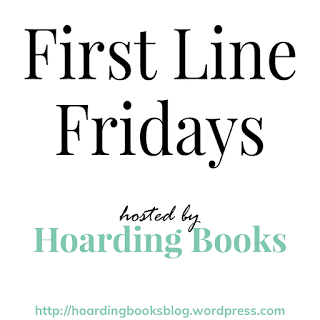 Posted by englishmysteriesblog at 1:00 AM 8 comments:

August Summer thinks she is a nobody until a London solicitor barges into her employer’s drawing room, revealing not only is she the daughter of an earl but a wealthy heiress as well. Optimistic about a new life, she travels to her ancestral home of Linfield Hall, only for her brother to banish her to London to live with her aunt, a dowager duchess with a reputation.

When Lord Bolton asks him to fetch his illegitimate daughter, solicitor Samuel Brooks does not expect himself to become so invested in the young woman’s debut after wanting nothing to do with dinners and balls before. But as August navigates her way through this new world of the British aristocracy, Brooks is the one who is most dazzled by her unexpected charms.

Since society demands every young girl must marry, August decides she will accept nothing less than someone’s heart in exchange for possession of her newfound fortune. Forced to reexamine his negative views of love and marriage or lose August forever, Brooks soon realizes his heart is the only thing in danger of becoming possessed. 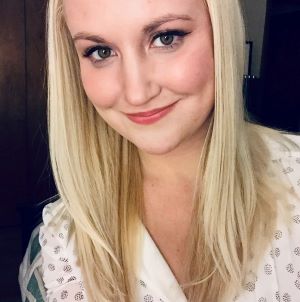 Becky Michaels is a historical romance author and self-proclaimed Anglophile. After graduating from Boston University with a degree in English, she reluctantly decided to get a day job but never stopped writing—or dreaming. The Land Steward's Daughter, a Regency romance set in 1815 England, is her debut novel. Despite the cold winters and high rent, she still lives in the Boston area with her boyfriend and cat.

“Miss Summer. There is a man here to see you.”

“What sort of man?” Charlotte, age thirteen, asked in an equally curious tone.

August shot a warning look at the girls, who sat at a table in the middle of the room taking a French exam. Still, they looked from the housekeeper to their governess with wide, excited eyes. Although they were five years apart, they almost looked like twins due to their similar features: curly brown hair, round cheeks, and dark eyes—not to mention their matching mischievous smiles.

“Finish your exam, girls,” August said, rising from her desk in front of the chalkboard. She smoothed the front of her dress. “When I return, I expect you both to be done.” She walked toward the doorway, pausing in front of Mrs. Howe. August turned back to the girls, narrowing her eyes. “And do not even try to cheat. You know I will find out.”

The girls giggled as August followed Mrs. Howe out into the hall. August quickly closed the classroom door behind them.

“A man?” she asked, eyes wide. Who could it be? August knew only one man—Henry Fitzgerald, the parish curate from Wilton—but she hadn’t heard from him since she left Hardbury School for Girls. In one of her more recent letters, Jane mentioned that Henry was now the vicar in Wilton, making him even further above her station than before. What would he want with her now?

“He said his name was Mr. Brooks,” Mrs. Howe explained.

Mrs. Howe nodded. August followed the housekeeper down the hall in somewhat of a daze. Out of all the people to visit her, she did not expect Mr. Brooks. August and her benefactor had not corresponded since he wrote to ensure her happiness with her placement with the Dunns almost three years ago. She had assured him that the position was suitable enough and hadn’t heard from him since.

Upon entering the drawing room, she expected to find someone with graying hair and wrinkles, just like the man who took her from the orphanage to Hardbury all those years ago. She saw a young man standing by the window instead, his side profile coming into view as she turned the corner into the room. August nearly froze at the entrance, surprised.

“Mr. Brooks,” Mrs. Howe said. The man called Brooks turned and faced them. He was tall with fair, curly hair that was slightly mussed as if he had just been sleeping. An expensive-looking but slightly wrinkled tan overcoat with a brown collar covered his broad shoulders. Dried mud stuck to the bottom of his black boots.

August was sure the confusion was visible on her face. He could not be the Brooks who took her from the orphanage to Hardbury all those years ago. This Brooks was much too young! He could not be older than thirty, with blue eyes, a broad nose, full lips, and a cleft in his chin.

“This is Miss Summer,” Mrs. Howe said, gesturing toward August, who smiled despite her nervousness. Brooks remained stone-faced.

“Thank you, Mrs. Howe,” he said, nodding slightly at the older woman. “May Miss Summer and I have a moment alone?”

Mrs. Howe nodded and turned to leave. She stopped beside August, leaning over and whispering in her ear. “I will give you fifteen minutes.”

August bit back a grin watching the older woman leave. If only Mrs. Howe knew how much could happen in fifteen minutes! When she glanced at Brooks again, she decided she did not think her mysterious benefactor, who somehow discovered the fountain of youth, was there to defile her. He looked far too severe for that.

After Mrs. Howe left, August and Brooks stood staring at each other for a long moment before she finally shook herself out of her reverie and gestured toward the pair of settees in front of the hearth. “Shall we sit down, Mr. Brooks?”

Brooks nodded, and the two sat across from each other, the warm fire crackling beside them. “You must be wondering why I’m here,” Brooks said.

“Yes, I am,” August admitted. She studied his face carefully, looking for signs of wrinkles, but there were hardly any. “Not to mention the Brooks I remember must be twice your age by now. You can’t be the one who took me from the orphanage in London to Hardbury in Hampshire all those years ago.”

Enter to win a copy of Lady August by Becky Michaels!
The giveaway is open to the US only and ends on June 4th. You must be 18 or older to enter.
Lady August 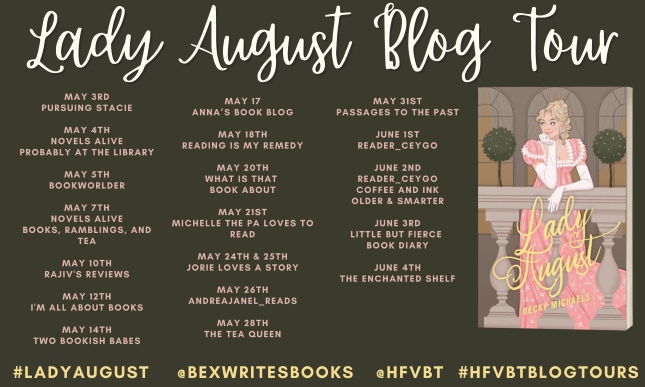