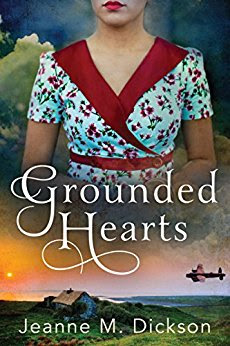 I enjoy purchasing historical books, and I love reading about fictional characters set in non-fictional worlds.  That is what Jeanne Dickson did with her book Grounded Hearts.  This story is set in Ireland during the days of World War II.  Each character within the pages of this book plays a vital role in either helping or hurting the war effort.  It is interesting to observe how certain individuals reject their place in the war--they want to remain neutral.  While others are willing to do whatever they can to help aid someone they barely know--someone who is fighting with the Allies.  Nan O'Neil finds herself in a precarious predicament when a man knocks on her door one night.  She never could have predicted what her future would hold in those first few moments of meeting Dutch Whitney.

Nan is from Ireland, and she is the town midwife.  After coming to the rescue for so many of the women in her village, she holds the respect of each one of her patients and their families.  Therefore, it is no surprise that so many of these women rescue her in the end.  Even though Nan lives quite simply, her needs are met, and she is content to live out her days alone--except for being in the company of a lovely cat named Mr. Dee.  However, Nan holds a dark secret close to heart.  Something she cannot seem to forgive herself for, because she believes it to be an unforgivable act.  It will take a new friend in her life to convince her otherwise.

Dutch Whitney call Canada home, but for now his home is in the sky.  He is an RAF pilot--a "flyboy."  Unfortunately, unforeseeable events in his life move him to another location--Ireland.  In an attempt to run for cover, he meets a young woman who will change his life forever.  This one woman confuses him and angers him, yet he cannot help but be grateful for her care.  She and so many others put their life and reputations on the line for him, which is a debt he feels he can never repay.

As a reader, you will encounter so many moments of conflict, but this type of suspense will make it impossible for you to put this book down.  You will be on the edge of your seat hoping Dutch will not be caught...hoping Nan will not go to jail...wondering what will become of the other characters in this town.  Every emotion is touched on, and every aspect of a person's character is revealed.  This historical story will touch your heart, because it will shine a light on those that fought and died during World War II.  It will also showcase real people who lived and worked during this era, which is why I love reading historical fiction.  If you enjoy history, then you will love this book.  Happy reading!

*In the midst of World War II, Ireland has declared herself neutral. Troops found on Irish soil must be reported and interned, no matter which side they are fighting for. When midwife Nan O’Neil finds a wounded young Canadian pilot at her door, she knows she’s taking a huge risk by letting him in. Not only is she a widow living alone, but if caught harboring a combatant, she’ll face imprisonment.

Still, something compels Nan to take in “flyboy” Dutch Whitney, an RAF pilot whose bomber has just crashed over County Clare. While she tends to his wounds and gives him a secret place of refuge, the two begin to form a mutual affection—and an unbreakable bond.

But Nan has another secret, one that has racked her with guilt since her husband’s death and made her question ever loving again. As Nan and Dutch plan his escape, can he help restore her faith?


*Synopsis is from the back cover of the novel. 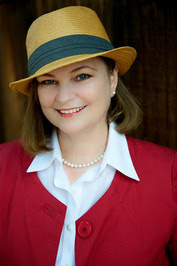 Jeanne M. Dickson was born into an Irish American family, the only girl surrounded by four brothers. Her grandmother lived with them and was a constant source of stories about life in Ireland and the saints and ancestors long gone from this earth. She credits her mother, her aunts, and her grandmother with her love of storytelling.

Posted by englishmysteriesblog at 12:02 PM