Hi friends!  I'm a little late in posting my top ten books this month, but I still wanted to let you know what books I read this past year, so I could recommend some stories to add to your reading list.  I hope you are all doing well, and I hope you were able to read tons of novels this past year!

I wasn't able to fulfill my reading goal for 2020, but I did discover many wonderful stories along the way, and I was able to meet and interview several incredible authors this past year, including Elizabeth Craig and Kathleen Denly.

Have fun reading the texts below and please share your favorite book finds in the comments below.  Happy reading friends!  And Happy New Year! 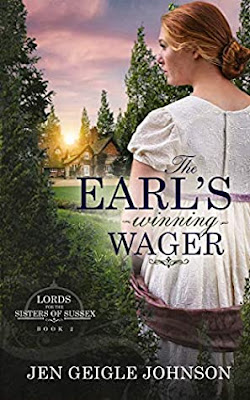 Lord Morley's life will change forever when he wins a game of cards and a family of sisters to go along with it.Miss Standish in none too pleased to have become the responsibility of yet another Lord, even if he is full of charm and goodness. Her responsibilities are to her sisters first.With the repairs on the castle moving forward nicely and concerted efforts in a season in Bath made to find suitors for them all, Miss Standish and Lord Morley must determine where duty stops and matters of the heart take over.Read this warm tale of family, sisters, loyalty and love to get a huge dose of the best part of a regency romance fans of Jane Austen or Georgette Heyer would enjoy.
Line by Line
by Jennifer Delamere 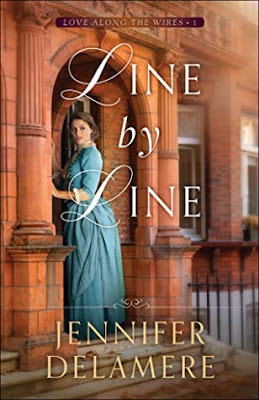 Alice McNeil resolved at a young age to travel through life unencumbered by love or marriage, free to make her own decisions. A seasoned telegrapher, she's recently acquired a coveted position at an important trading firm, but when the company's ambitious junior director returns to London, things begin to change in ways Alice could never have imagined.

For Douglas Shaw, years of hard work and ingenuity enabled him to escape a life of grinding poverty. He's also determined to marry into high society--a step that will ensure he never returns to the conditions of his past.

He and Alice form a friendly relationship based on mutual respect, but anything deeper is not in their plans. However, when Alice accidentally raises the ire of a jealous and vindictive coworker who's intent on ruining her life, Alice and Douglas are forced to confront what is truly important in their lives. Will their growing bond give them the courage to risk finding a better way?
Pressed for Time
by Elizabeth Craig 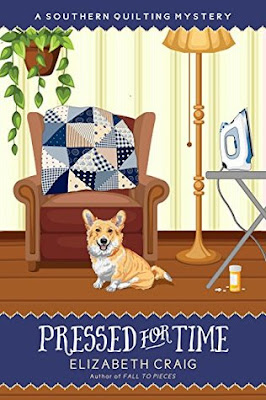 As Beatrice’s wedding day approaches, murder finds a way to make her pressed for time.

Beatrice and Wyatt’s days are spent planning their cozy, chapel wedding. Both widowed, they mean to keep their wedding an intimate, family affair.

But everyone in Dappled Hills still wants to celebrate the happy couple. Beatrice and Wyatt find themselves at dinners, picnics, and barbeques in their honor.

When one of the festivities goes deadly wrong, Beatrice must try to unveil the killer before making her vows.
Deadly Pearls
by Miranda Atchley 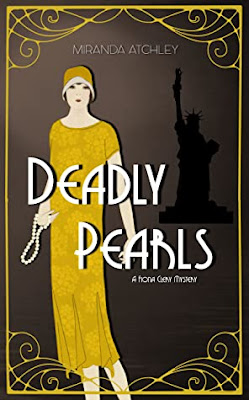 She knew coming to America would be an adventure. But she didn't know it would involve murder.Intelligent and inquisitive Irish immigrant Fiona Clery has always longed for a life of excitement away from her family’s farm. Yet living in New York City isn’t as glamorous as she’d always dreamed. When her neighbor is murdered, she wonders how wise her decision to come to the United States is. While the police turn a blind eye to Gabriel Morelli’s murder, Fiona knows she must do all that she can to find the killer. Under the tutelage of her favorite fictional sleuths Sherlock Holmes and Hercule Poirot, she just might crack the case–if a certain man will ever stop infringing on her investigation.Max Gillespie is good at putting on an act. A Great War veteran, he struggles with regret from his past, though refuses to let it show. Perfectly content to spend his days working as an accountant and evenings tucked in his apartment away from the excitement of the city, he shuns anything that could lead to unwanted surprises. Yet when his cousin Rose’s beau is murdered, he finds himself pulled into the investigation alongside a smart and pretty amateur sleuth who he can’t help but clash with. Exposed to the underbelly of the city he loves, Max wonders if he was mistaken to involve himself in a murder investigation. Yet when Rose’s invaluable pearl necklace is stolen and in its place is left a threatening note, he vows to do all that he can to keep those he loves safe.In Jazz Age New York, Fiona and Max will have to navigate this roaring new decade while learning the truth about those around them–as well as themselves.
Her Silent Knight
by Ashtyn Newbold 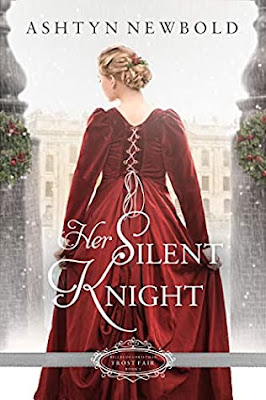 When Sir Edmund catches Miss Selina in a forbidden courtship at the frost fair, she asks for his silence. But he has a request to make in exchange, and it may cost Selina her carefully guarded heart.

Five Christmas romances and the Frost Fair that started them all.

Her Silent Knight is the first book in the clean and sweet Regency romance Belles of Christmas: Frost Fair series.
Although this is a stand-alone novel, the books are best enjoyed when read in order.

Book 1: Her Silent Knight by Ashtyn Newbold
Book 2: All is Mary and Bright by Kasey Stockton
Book 3: Thawing the Viscount's Heart by Mindy Burbidge Strunk
Book 4: On the Second Day of Christmas by Deborah M. Hathaway
Book 5: The Christmas Foundling by Martha Keyes
Discoveriing Grace
by Sally Britton 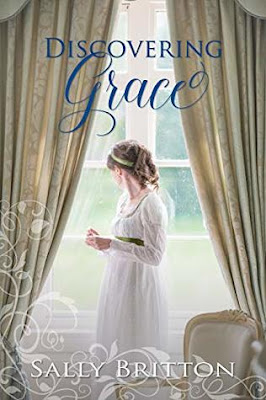 To avoid being sent across an ocean, Grace switches places with her sister. The only man aware of their deception? A dear friend, and her secret love.

Grace Everly has no desire to set sail for the Caribbean, unlike her adventurous twin sister, Hope. Thanks to her sister’s irresponsible behavior and subsequent banning from the journey, Grace’s father decides to send her in Hope’s place. Desperate to remain where things are familiar, Grace proposes an unthinkable plan: that she and sister switch places. They only have to keep up the act long enough for Hope to board a ship in London. When the man who has stolen Grace’s heart learns of their secret, things get more complicated.

Jacob Barnes, soon to be ordained a vicar, has known Grace and Hope his whole life. Though close to both sisters, he’s dreamed of courting Hope for months. When he realizes his friends have switched places, putting the woman he admires out of his reach, he agrees to help with the subterfuge despite his bruised heart. As he watches Grace stumble in her acting abilities, attempting to change who she is, he realizes how much she means to him. But how does he tell her, without risking their friendship?

The deception puts their relationship to the test. As Grace hides her heart and her identity, Jacob examines his feelings, and no one in their community will be happy when the truth is discovered.
Lakeshire Park
by Megan Walker 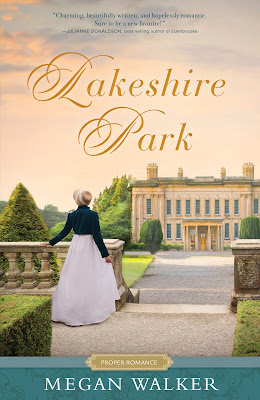 Amelia Moore wants only one thing—to secure the future happiness of her younger sister, Clara. With their stepfather’s looming death, the two sisters will soon be on their own—without family, a home, or a penny to their names. When an invitation arrives to join a house party at Lakeshire Park, Amelia grasps at the chance. If she can encourage a match between Clara and their host, Sir Ronald, then at least her sister will be taken care of.

Little does she know that another guest, the arrogant and overconfident Mr. Peter Wood, is after the same goal for his own sister. Amelia and Peter begin a rivalry that Amelia has no choice but to win. But competing against Peter—and eventually playing by his rules—makes Amelia vulnerable to losing the only thing she has left to claim: her heart.
A Christmas Match
by Rose Pearson 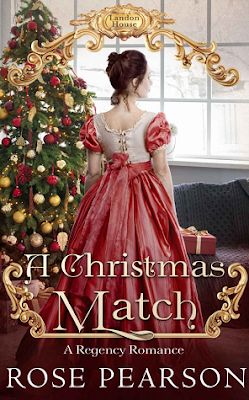 Lady Charity loves the Christmas season. But can she convince the Lord Benedict of the joys of the Christmas season? And perhaps find love along the way?Lady Charity is a little disappointed. With her older sisters now wed, it is her turn to experience London society but, unfortunately, she must attend during the winter, when it is quiet and a little less exciting. However, determined to do her best, she steps into a wintery London and into society.Guided by Lady Hayward, Charity finds herself rather delighted with society—all save for one particular gentleman who, for whatever reason, has never a kind word to say to anyone. Despite knowing she should step away, Charity finds herself quite intrigued by him, wondering what it might be that troubles him so and soon finds herself quite determined to improve his demeanour.Benedict, the Marquess of Hosmer, has always despised the festive season, ever since his betrothed cried off. Now, for whatever reason, he has met the most frustrating young lady who is more than eager to convince him of the happiness that can be found at Christmas time. The more he pushes her away, the more determined she becomes.Will he ever be able to free himself from her? Or will her gentle sweetness bring him closer to her than ever before?This is the fourth book in the Landon House series, where Lady Hayward and the Duke of Landon form an alliance to assist each other with difficulties of their family life.
His Forever Valentine
by Kit Morgan 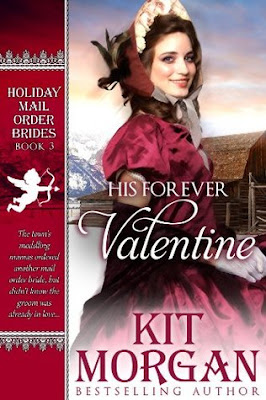 Enjoy this third installment of the Holiday Mail Order Brides as Kit Morgan delivers another delightful romp of sweet romance in the old west!What happens when meddling mother's order their sons mail order brides and not tell them? It happened to Clayton Riley, it happened to his brother Spencer, and now it was Matthew Quinn's turn. There was just one, little, problem. He was already in love ...Rose Smith didn't know what to expect when she signed on the dotted line at the Ridgley Mail Order Bride Service, all she knew was that adventure awaited her in the wild west! And what an adventure she got when she showed up in the town of Nowhere!
Sense and Sesibility
by Jane Austen 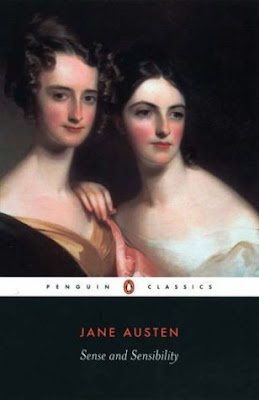