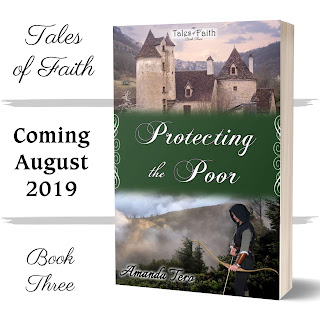 Sheriff Feroci is now lord over the province, and Abtshirehas become a pit of injustice. Being forced into the lord’s service does not give Dumphey as many opportunities to help the poor as he desires. When attempts on his life drive him into the forest, this freedom opens a world of possibilities for helping others. But how can he do so when he is running for his life? And does God want him to do more than simply feed the poor?

Noel has always hidden behind the shadow of his older brother, Dumphey. When life forces him to stand on his own, will he still follow God in the corrupt world in which he lives? Would God really call him to do something that is beyond his power to do?

As Lord Feroci's sinister plot comes to light, each lad has a choice to make. A choice that could cost them their lives. 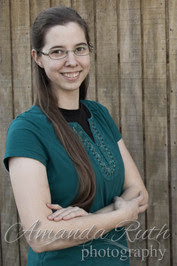 Amanda Tero began her love for words at a young age—reading anything she could get her hands on and penning short stories as young as age eight. Since graduation, she has honed her writing skills by dedicated practice and study of the writing craft. She began her journey of publication with a few short stories that she had written for her sisters and continued to add to her collection with other short  stories, novellas, and novels. It is her utmost desire to write that which not only pleases her Lord and Savior, but also draws the reader into a deeper relationship with Jesus Christ. 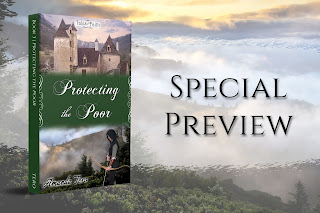 Lord Feroci slammed the desk with his fists. “I didn’t send you on a fool’s errand, Barat.” He clenched his teeth as he glared at the missive opened before him.
“Aye, sir. I cannot help that others are the fools.”
Feroci released his anger in a growl. Barat stood patiently; his arms crossed.
“We’re losing time, Barat.”
Barat didn’t respond.
“You’re not doing enough.” He raised his head to glare at his man. Barat stared him down. Nothing could phase this man. Which was exactly why Ferocihad him in his employ. But ’twas irksome at times. Feroci blew out his pent-up air and fell back into his chair. “What do you suggest?” Barat was the only man in Abtshire from whom he would even consider suggestions. The man had proven his loyalty on the battlefield, taking more than one scar for Feroci. Feroci had returned the favor as many times. They were in this together.
Barat finally stepped forward, but he didn’t sit in the seat across Feroci. Instead, he took the missive from Feroci’s desk and held it at two corners. “I say, we do this...” He pulled at the paper and it ripped—something weak giving way to a greater force that commanded it. That sight alone gave Feroci strength and he nodded in satisfaction.
“Aye. Something made from pulp cannot stand against an iron fist. They will give way.”
“Call another meeting.” Barat layered the two pieces of paper and held them over one of the candles that shed light in the dim room. A small strand of smoke wove upward before the paper burst into flame. Extra light illuminated the room then dimmed as the paper turned into gray ash. “We know their weaknesses as well as their strengths. Use their weaknesses against them. Convince them that there is no other choice.”
Feroci leaned forward and grabbed the quill he had dropped when Barat had entered. He ran his fingers across its smoothness before taking a clean paper. “Well put.” He dipped the quill in ink. “Matheny ... ’tis a vast city, but given the right promise, the townspeople will rebel and overthrow Lord Nedry.” He wrote a few lines, shaping the concept that Barat had supplied. “Haar is closer to the king, so that could pose problems.”
“Then wait on Haar. We’ve three cities between our province and them.”
Feroci didn’t look up from his writing. “Lord Alexandre is on my side. If he works with me, mayhap we can claim the help of Belmis, Metz, and Kiralyn.” He paused at the last name. The anger that had dissipated boiled under the surface once more.
“You can’t obtain Kiralyn—”
“Curse you, man!” Feroci threw his quill at Barat. The man didn’t flinch. “We’ll have to overthrow Lord Kiralyn and sever any ‘blood ties’ to the king. I will obtain the throne. “He stood and his chair crashed backward. Obtaining Lord Trent’s domain from the king had been an easy task. The unfortunate lord had conveniently died in battle with no other witness besides Barat. The king had promoted Feroci from sheriff to lordship, giving him reign over Abtshire, Fordyce, and Keller. Controlling the latter two was nothing—they were mere hamlets comparedto the likes of Matheny. Feroci had the talent and ability for so much more.
He had to gain control before Yzebel gave birth to their child—his heir. It must be his heir. He had no use for a lass. But a son—a son he could shape and mold, without the meddling of others, to follow in his footsteps ... aye, that son would establish their family as royalty forever. The land was now under the leadership of a man who had gone mad since his daughter’s return. Why had he named Princess Belle as heiress of the kingdom? She had left her father and had been raised by Lord and Lady Kalanithi, Feroci would know—he was one of the only lords the king didn’t refuse to see after the death of his wife. In the king’s dark hours of grief, he had made substantial promises to Feroci for his help. Promises that had blown away much like the ash of the letter Barat had burned.
Feroci had written. Barat had spoken. Nothing would sway the king’s mind. He was going against all tradition of the land and naming a woman as leadership, should he pass before she married.
“I can’t marry the lass myself, and I haven’t a son to do so. I will make the king pay,” Feroci hissed. He walked to the window and pulled back the drapes that blocked the fading daylight. A lad stood below, staring up at him. Recognition slammed Feroci when his eyes locked onto the lad. He was more ofa threat to Feroci than he would ever know.
“Barat.”
The man joined him.
“How much did he hear?”
The lad’s gaze shifted to something in the distance. He turned and walked toward the barracks—the place he should have already been at this time of day.
Barat’s dark eyes followed the lad’s movement. “You can finally make your move against him.”
Finally. Feroci liked the sound of that word. He had waited too long, but he would wait no longer. “Take care of him.”
The silence between them sealed the promise.
“But don’t make it a matter of convenience.” Feroci let the drapes fall. “I don’t want to raise suspicion.” 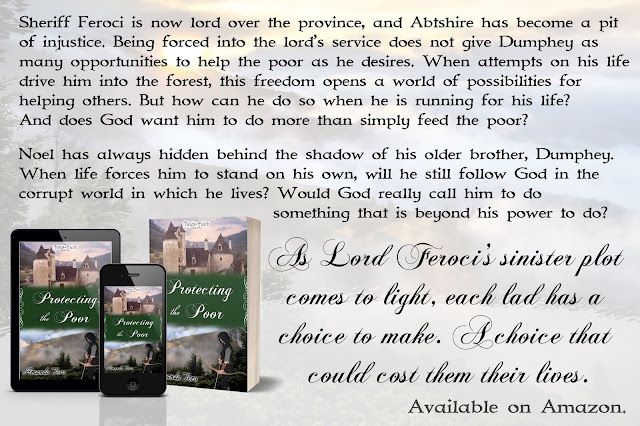 Posted by englishmysteriesblog at 9:00 AM