The Captive Imposter - My Review 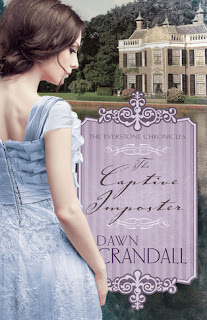 Dawn Crandall's book The Captive Imposter is the third novel in The Everstone Chronicles.  For this book, the reader will be introduced to a new couple, yet these individuals will still be connected to the other characters we met in the first two novels.  You may be able to read this book as a stand alone text, but I really recommend reading the series in order so you can gain a better overall understanding of each character, the time period they are living in, and the setting for each of these stories.  I must say that I have thoroughly enjoyed each of these books, and I am excited to read the fourth book in the series, The Cautious Maiden.

Estella Everstone has lived a privileged life.  In most cases, she has always received the desires of heart--dresses, jewelry, attending the latest ball with the man of her choice on her arm--yet deep down she feels invisible and miserable.  She realizes that most men only see the glamour and her enormous inheritance, but they do not see the real Estella.  Will this ever change though?  An unforeseen tragedy shatters Estella's world, and she is forced to live the life of another.  She begins working as a companion for Mrs. Granton, but this is no ordinary job.  Unknown to Mrs. Granton, Estella's real life and identity is now destined to be hidden.  And when more trouble arises, Estella finds herself desolate and alone.  How could someone of her station in life be in the predicament she is in?  What was she going to do now?  Would anyone be there to rescue her?

Dexter Blakely has known heartbreak himself.  Years ago, shattering events touched the lives of his family members and also those of another family.  These times can never be forgotten and ultimately they have forever altered Dexter's perspective on life and love.  He believes he will never marry or fall in love--until one day he meets a stranger in a stagecoach.  Yet she is not who he believes her to be, and as usual lies will eventually unravel to reveal an ugly truth.  Will he ever be able to trust again?  Will he ever leave his judgments behind?  He desperately wants to do the work of the Lord where he can, but he still has so much to deal with regarding his own heart.  Slowly, the Lord begins to reveal His ultimate purpose for Dexter.  Ironically, it is a path Dexter never considered he would walk down.

Estella's past keeps calling to her, but it is a part of her past she would now love to let go of.  The man she was once secretly engaged to continues to haunt her. Why can't she banish the thoughts of him?  Estella desperately wants to move on with her life--but move on to what?  At present, her future looks bleak, and she misses her family.  However, she does not want to run back to her family and be the failure she feels she is.  Somehow she must take care of herself.  If only she knew how the Lord was about to take care of her, because then she would choose to rest in His loving care.

This book was as perfect as the first two.  There are so many dynamics going on among the characters, yet Crandall's fluid writing style makes it an easy, enjoyable read.  It is definitely a complex story but not difficult to understand.  You will find yourself on the edge of your seat as you hope various characters will find the life they need--the life that is best for them.  As soon as one scene plays out, the next scene alters the first one.  Eventually, you will come to wonder how the story will end, and once it does, you will be sad to close the pages of this book.

Thankfully, there is another story after this tale, and I will be reviewing that novel soon.  In the meantime, I encourage you to purchase this book along with The Hesitant Heiress and The Bound Heart.  Each book displays the struggles and hopes of mankind and how when we find ourselves at rock bottom, such as Estella, only then do we cry for help.  Amazingly, our Heavenly Father is there to rescue us and pick us up when we fall.

Crandall brilliantly reminds her readers of this promise throughout her stories, which makes them even more beautiful.  If you are looking for lovely book to read during your spare moments throughout the day, I recommend getting to know the world the Everstones live in.  There you will be able to connect with stories from the past while also learning to apply those lessons to the adventures of the present.

*Sent away for protection, hotel heiress Estella Everstone finds herself living undercover as a lady’s companion named Elle Stoneburner at one of her father’s opulent hotels in the mountains of Maine—the one she'd always loved best and always hoped to own one day, Everston. The one thing she doesn't like about the situation is that her ex-fiancé is in the area and is set on marrying someone else. Reeling from her feelings of being unwanted and unworthy, Estella reluctantly forms a friendship with the gruff manager of Everston, Dexter Blakeley, who seems to have something against wealthy young socialites with too much money, although they are just the kind of people Everston caters to.

When Estella finds herself in need of help, Dexter comes to the rescue with an offer she can't refuse. She sees no other choice aside from going back home to her family and accepts the position as companion to his sister. Throughout her interactions with Dexter, she can't deny the pull that's evidenced between them every time he comes near. Estella realizes that while she's been hiding behind a false name and identity, she’s never been freer to be herself than when she's with Dexter Blakeley. But will he still love her when he finds out she's Estella Everstone? She's not entirely sure. 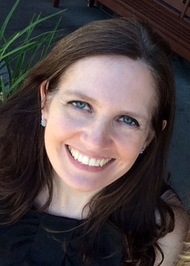 Dawn Crandall is an ACFW Carol Award-nominated author of the award winning series The Everstone Chronicles from Whitaker House. The series consists of three books: The Hesitant Heiress, The Bound Heart and The Captive Imposter.

Dawn is represented by Joyce Hart of Hartline Literary. Apart from writing books, Dawn is also a first-time mom to a precious little boy (born March 2014) and also serves with her husband in a pre-marriage mentor program at their local church in Fort Wayne, Indiana.

Visit her online at:  www.dawncrandall.blogspot.com

Posted by englishmysteriesblog at 4:23 PM