So I decided to compile a list of the books I have read from the Gilmore Girls reading list.  Let me start by saying, we should all strive to be as literary at Lorelai and Rory!  There are several authors in that list from Thursday that I have studied, but I did not add them to my book list, because honestly I cannot remember every text of theirs I have read.  So many of the Norton Anthologies I read in school compiled bits of their work--poetry, short stories, excerpts from their novels--that it becomes almost impossible to remember every piece.  Virginia Woolf, Ernest Hemingway, Sylvia Plath, Leo Tolstoy, and D.H. Lawrence are just a few of the writers that could fall into that category.  However, I did include the novels I read either as a child or in school--some of which are near and dear to my heart.  Can you guess which ones? 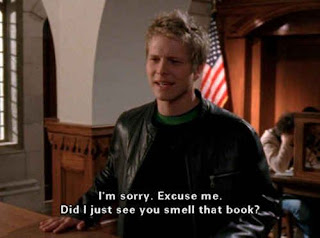 1. 1984 by George Orwell
2. Adventures of Huckleberry Finn by Mark Twain
3. Alice in Wonderland by Lewis Carroll
8. The Diary of a Young Girl by Anne Frank
10. The Art of Fiction by Henry James
12. As I Lay Dying by William Faulkner
15. The Awakening by Kate Chopin
20. The Bell Jar by Sylvia Plath
22. Beowulf: A New Verse Translation by Seamus Heaney
27. Brave New World by Aldous Huxley
30. Candide by Voltaire
31. The Canterbury Tales by Chaucer
35. Charlotte’s Web by E. B. White
38. A Christmas Carol by Charles Dickens
42. A Comedy of Errors by William Shakespeare
47. The Count of Monte Cristo by Alexandre Dumas
56. David Copperfield by Charles Dickens
60. Death of a Salesman by Arthur Miller
64. The Divine Comedy by Dante
66. Don Quixote by Cervantes
69. Edgar Allan Poe: Complete Tales & Poems by Edgar Allan Poe
75. Emma by Jane Austen
89. The Fellowship of the Ring by J. R. R. Tolkien
97. Frankenstein by Mary Shelley
108. Goldilocks and the Three Bears by Alvin Granowsky
109. Gone with the Wind by Margaret Mitchell
114. The Great Gatsby by F. Scott Fitzgerald
115. Great Expectations by Charles Dickens
117. Hamlet by William Shakespeare
121. Heart of Darkness by Joseph Conrad
123. Henry IV, part I by William Shakespeare
124. Henry IV, part II by William Shakespeare
125. Henry V by William Shakespeare
133. How the Grinch Stole Christmas by Dr. Seuss
136. The Hunchback of Notre Dame by Victor Hugo 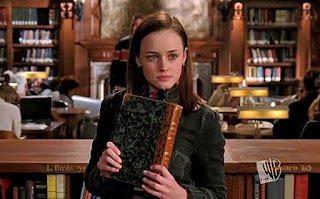 How many books have you read from the Gilmore Girls book list?  Let me know in the comments below!  As always, happy reading!

Posted by englishmysteriesblog at 10:20 AM