Murder in the Mystery Suite - My Review 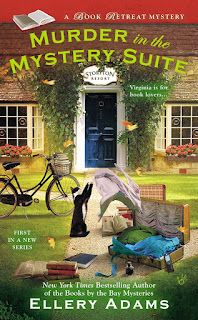 I just finished reading a lovely book called Murder in the Mystery Suite by Ellery Adams.  Mystery novels are one of my favorite genres so this story was a perfect addition to my book collection.

The setting takes place at Storyton Hall, which is a resort tucked away in picturesque Virginia.  The resort has been passed down from generation to generation, and the halls of Storyton hold a special secret that only the guardian knows about.

From the beginning of the text, every character you meet and every store you visit in the town carry a literary name.  In fact, Ellery Adams must know her literature and detective stories well, because she references vintage and modern terms throughout the novel.  Nick and Nora Charles from the Thin Man films, Sam Spade from The Maltese Falcon, the beloved English Detective Inspector Morse, Agatha Christie, and Hercule Poirot are a few of the names she includes in her book.  Of course literary greats, such as Jane Austen, Charles Dickens, and Lewis Carroll are mentioned as well.

Adams gives the most interesting names to the shops in Storyton too--Geppetto's Toy Shop, Cheshire Cat Pub, and The Potter's Shed.  Her vivid descriptions of each shop and the animated people who own them make for a delightful read.

The main character Jane Steward, who is the manager of Storyton Hall, is a recent widow raising twin boys.  Her Aunt Octavius and Uncle Aloysius oversee the resort along with the help of a butler, librarian, chauffeur, housekeeper, and chef.  And each employee at Storyton holds a special job that is pivotal to the success of the resort running properly.

With each turn of the page, the reader will discover that people and events are not always what they seem, and that there are many hidden secrets being kept from those that reside at Storyton Hall.  Even Jane herself is in for many surprises, as she learns more about her family heritage.

If you love mysteries, I highly recommend this book.  You will be hooked from the first page to the last, and I am happy to report that the second book in this series came out in August.  I will be reviewing Murder in the Paperback Parlor later this year.

Please let me know what you think of this novel in the comments below.  Happy reading!

*Tucked away in the rolling hills of rural western Virginia is the storybook resort of Storyton Hall, catering to book lovers who want to get away from it all. To increase her number of bookings, resort manager Jane Steward has decided to host a Murder and Mayhem week so that fans of the mystery genre can gather together for some role-playing and fantasy crime solving. 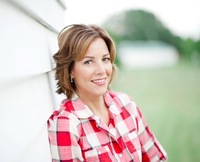 Ellery Adams grew up on a beach near the Long Island Sound. Having spent her adult life in a series of landlocked towns, she cherishes her memories of open water, violent storms, and the smell of the sea.

Ms. Adams has held many jobs including caterer, retail clerk, car salesperson, teacher, tutor, and tech writer, all the while penning poems, children’s books, and novels. She now writes full-time from her home in Virginia. Visit her website at:  www.elleryadamsmysteries.com

Posted by englishmysteriesblog at 1:21 PM